A warning from the top of the US central bank that there’s more pain to come isn’t going down well across markets. Fed Chair Jerome Powell warned yesterday that more stimulus will likely be needed in the US to fend off the economic damage done by virus and policies aimed at containing it.

Powell’s warning comes on top of early signs of a second wave of new virus cases. Investors will be watching with interest the ability of authorities in South Korea to ‘track and trace’ attendees of night club that started a new cluster of cases. Likewise Germany’s infection R-rate that below back below 1.0 yesterday.

It feels like we’re on the precipice of another jolt across markets. The idea of a second wave is taking hold and share look rich over the March lows. Some kind of bigger pullback feels inevitable but there’s a reason to think we don’t need to retest the March low. If the tracing apps used in South Korea helps prevent a second wave that would increase confidence in the technology and could give stock markets a second wind.

Shares in Europe have opened on a weaker note after Fed Chair Jerome Powell predicted a slow US recovery that would translate to a weaker global economy through 2020 and into 2021.

The FTSE 100 is lower despite some upbeat company updates. Hargreaves Lansdown will keeps its dividend and homebuilder Persimmon said it would be reopening sales offices across England. It’s an interesting dynamic for asset managers right now. The market decline opens a window to a new generation of investors put off by years of sky-high share prices.

The DAX index is being discounted by -1% in early trading with the biggest German companies some of the exposed to the kind of slow-burn recovery opined by the Fed Chair.

Switzerland’s SMI seems to have stalled at 9750, worryingly short of the big 10,000 level and -14% from February’s record high.

Tencent shares have risen to fresh two-year highs, erasing year-to-date losses and paving a path toward record highs reached in January 2018. Like many big tech names, Tencent seems to be outstripping its already high growth rate in the pandemic. Chinese gamers took to Tencent’s mobile video games in big numbers during the lockdown in China. The firm seems to have worked out its differences with Beijing over new games titles approvals so the biggest exposure maybe its exposure to the real Chinese economy whereby gamers may spend less and firms will likely cut back on advertising spend.

While calling for “additional policy measures” Powell ruled out negative rates in the United States. That has bolstered the dollar, which still has a yield advantage over the likes of the Eurozone and Japan which still have NIRP intact.

We think Powell is right to avoid negative rates that would decimate US money markets funds. We think Fed funds futures pricing in negative US rates this time next year are pricing in some other kind of extreme policy like stocks purchases and/or direct FX intervention

Gold rose by the most in a week after Powell comments the new stimulus measures (read money printing) would likely be needed. The gains were limited since Powell still denies any thought of negative interest rates. Negative rates would be the ultimate boon for gold. For the first time gold would have a nominal yield advantage over American cash. 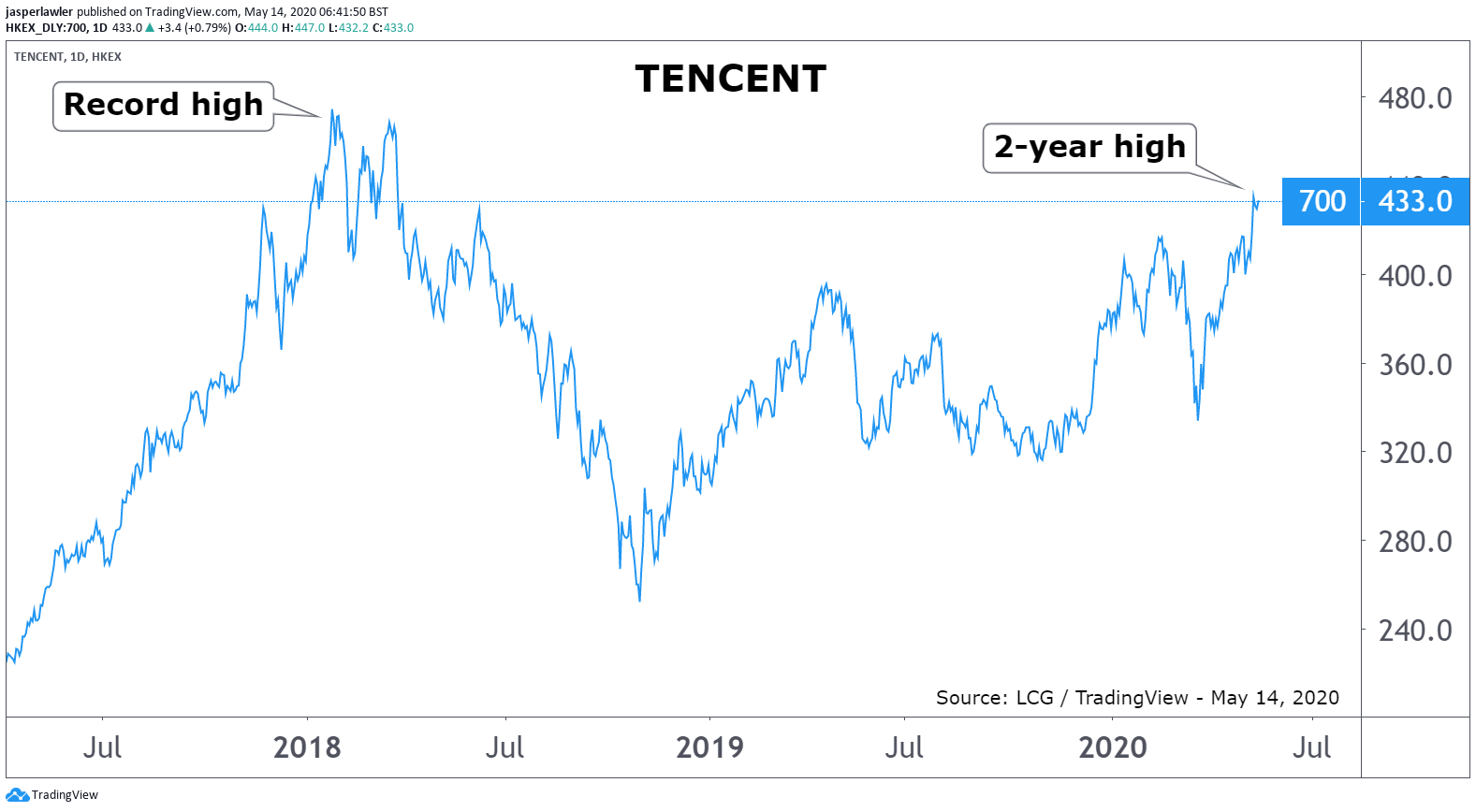 Tencent shares have cleared resistance from 400 HKD and are now at the highest since March 2018.