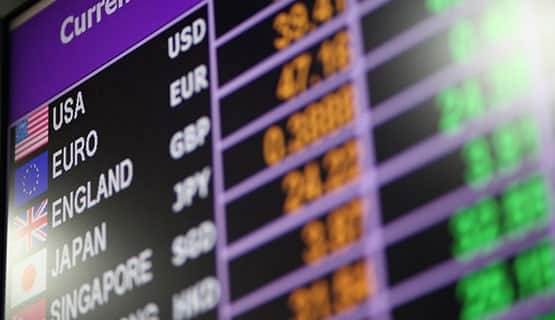 US equities reached fresh all-time highs following an inspiring jobs report on Friday. The US economy added 128’000 new nonfarm jobs in October, comfortably beating the 85’000 expected by analysts despite the GM strike. The average hourly earnings grew 0.2%, slightly lower than 0.3% penciled in by analysts, but better than 0.0% printed a month earlier.

Meanwhile, the softer-than-expected manufacturing PMI print in the US has been fully diluted in the mix. Due today, a 1.1% monthly contraction in US durable goods orders and 0.4% decline in factory orders could throw some cold water on the market euphoria.

But for stock buyers, there is always a good excuse to jump on the back of a bull. If nothing, the rising enthusiasm regarding a US-China deal and the fear-of-missing-out something big could continue fueling the ongoing rally – even though the divergence between the equity prices and the underlying company earnings have set off alarm bells for fundamental investors.

US Secretary of Commerce Wilbur Ross said that a phase-one deal will be reached with China soon and that the American companies will be given licenses to do business with the Chinese tech giant Huawei ‘very shortly’. Given that the APEC summit has been cancelled, US President Donald Trump and Chinese President Xi Jinping will probably meet in the US to reach at least a partial agreement.

It appears that US negotiators have higher hopes compared to their Chinese peers, who have voiced their concerns about the feasibility of a long-term trade deal last week.

But this time, Donald Trump, cornered by his impeachment hearing that is about to go public, may find an accrued interest for signing at least a partial trade deal with Xi, diverting a part of the market attention towards that much-expected deal, getting his Chinese counterparts to boost their farm product purchases and regaining popularity among his rural voters.

Afterall, a partial deal is certainly a better outcome from a market perspective. Leaving investors hungry for a comprehensive deal should help pushing the stock prices higher and Donald Trump needs the stock prices to rally for at least one more year. Getting a 360-degree deal done, on the other hand, could trigger a downside correction at some point, especially if the post-deal company earnings fail to meet the improving market expectations in the coming quarters.

Asian stocks rose with the weekly opening bell. The Hang Seng index gained 1.33% on slowing retail sales wind down in September. But the street protest continued unabated during the weekend and last week’s data suggested that the increasingly violent protests resulted in the second biggest economic contraction in Hong Kong on record.

Japan was closed due to bank holiday.

European and British stock futures hint at a positive start on Monday.

Saudi has finally approved the long-expected Aramco IPO. Aramco stocks will probably go public in December in Riyadh. Prince Mohammad Bin Salman is looking for a valuation between $1.6 to $1.8 billion, meaningfully less than the $2 billion targeted earlier. But even that could be a hard target to reach. Aramco could get listed 25% below the Saudi’s initial endeavour due to an unfavourable economic conjuncture, waning global demand and falling oil prices. But the world’s most profitable company may still aboard investors throughout the world.

Aramco’s entry will likely give a shake to major energy stocks, as investors would hardly leave the Saudi’s oil giant out of their energy portfolios.

As such, the European energy stocks could feel the pinch of the Aramco’s IPO announcement at the open.

Gold remained bid near $1510 an ounce despite an improved appetite for risky assets. Low-to-negative yielding bonds and the prospect of looser monetary policies keep the gold demand solid near the $1480 an ounce, but investors remain reluctant to push the yellow metal above the $1520 level.

The EURUSD continues testing the 1.1170/1.1180 resistance on the back of a still US dollar. The faster slowdown in Eurozone’s manufacturing activity remains a severe headache for the economy, and the drowning investor confidence could give a chill to euro purchases this morning, but it will certainly not get in the way of a further advance towards and above the 1.1200 barrier against the US dollar.

The pound, on the other hand, struggles with solid offers into the 1.30 mark against the greenback. Political uncertainties should cap the upside potential heading into the early election in December.

The Bank of England (BoE) is expected to stay pat at Thursday’s meeting. The strengthening pound has a cooling effect on inflation for now, providing a larger scope for a central bank intervention in the new year, if things were to get ugly.