By Jasper Lawler
EURUSD > 1.10 on talk of US-China currency pact 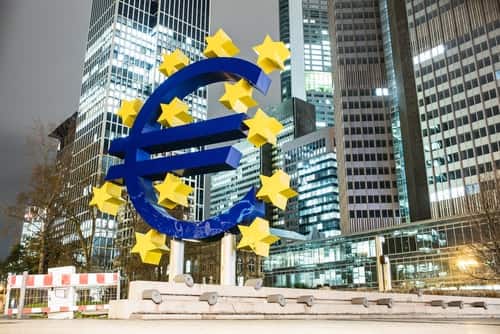 European shares are lower on Thursday. The losses in Europe follow a volatile session in Asia where shares gyrated to conflicting reports over the backdrop to high level trade talks set to begin today.

Trade talks – “partial deal” would be huge for equities

The high-level talks that markets had set their sights on begin today. In the week before these talks, markets have gone precisely nowhere. Investors are waiting for the conclusion of these talks before taking their next move. With trade talks concluded and earnings season about to kick-off, we’d expect volatility to pickup heading into next week.

There are clearly many issues that can derail these talks but the concept of a “partial deal” has breathed new life into the idea of a pre-US election agreement. Even if a partial deal can be defined as something as simple as less tariffs and more agricultural purchases, the current situation would be much less antagonistic with better prospects of ending the trade war.

Talk of US-China currency pact has sparked some understandable forex market volatility. One would assume if a specific dollar-yuan exchange rate forms a part of the pact, it would be at a stronger yuan (weaker dollar) level than today. A specific level would be hard to operate but a band around a specific level could work with China’s current managed currency regime. We said at the start of the week that the ECB has shown its hand and that forex moves are now dollar-driven. The dollar is weakening not just against the yuan but also the euro. The prospect of another US rate cut this month as well as front-running Federal Reserve asset purchases adds to the bearish-dollar tone. We don’t know how long a currency pact has been discussed in technical trade talks between the US and China but on the assumption it is a new idea, there would likely not be enough time to decide how to implement it in time for the high level talks today and tomorrow.

UK GDP – no trigger point for a BOE rate cut

The Brexit deadline gives these growth stats more weight than usual. Growth for the UK in August fell -0.1%, more than expected. But June July was revised higher so it looks like the UK will eek out some growth in Q3 and avoid a recession. Back to Brexit for a moment. Most market participants have taken no-deal off the table, including us – but never say never. If the Bank of England were faced with a “disorderly” Brexit, recession or not, we think a rate cut is the default policy response. EURGBP cleared 0.90 in the run-up to the data and we’d expect rate cut expectations to encourage further weakness in the pound against the euro.

It’s notable that weekly supply data has barely moved the needle for oil prices. For now it’s all about the trade talks and the implications for global growth and oil demand. Brent crude is resting just around $58 per barrel – and that makes sense as the mid-point between the 2019 low around $55 and the psychological level of $60. If somehow progress is made in trade talks, with a backdrop of a Turkish ground attack in Syria adding to the geopolitical unrest, we would expect Brent crude to close the year above $65 per barrel. For the moment, chances of a deal look slim and a move below $55 appears most likely.